» Reading Reviews » The spirit of the valley 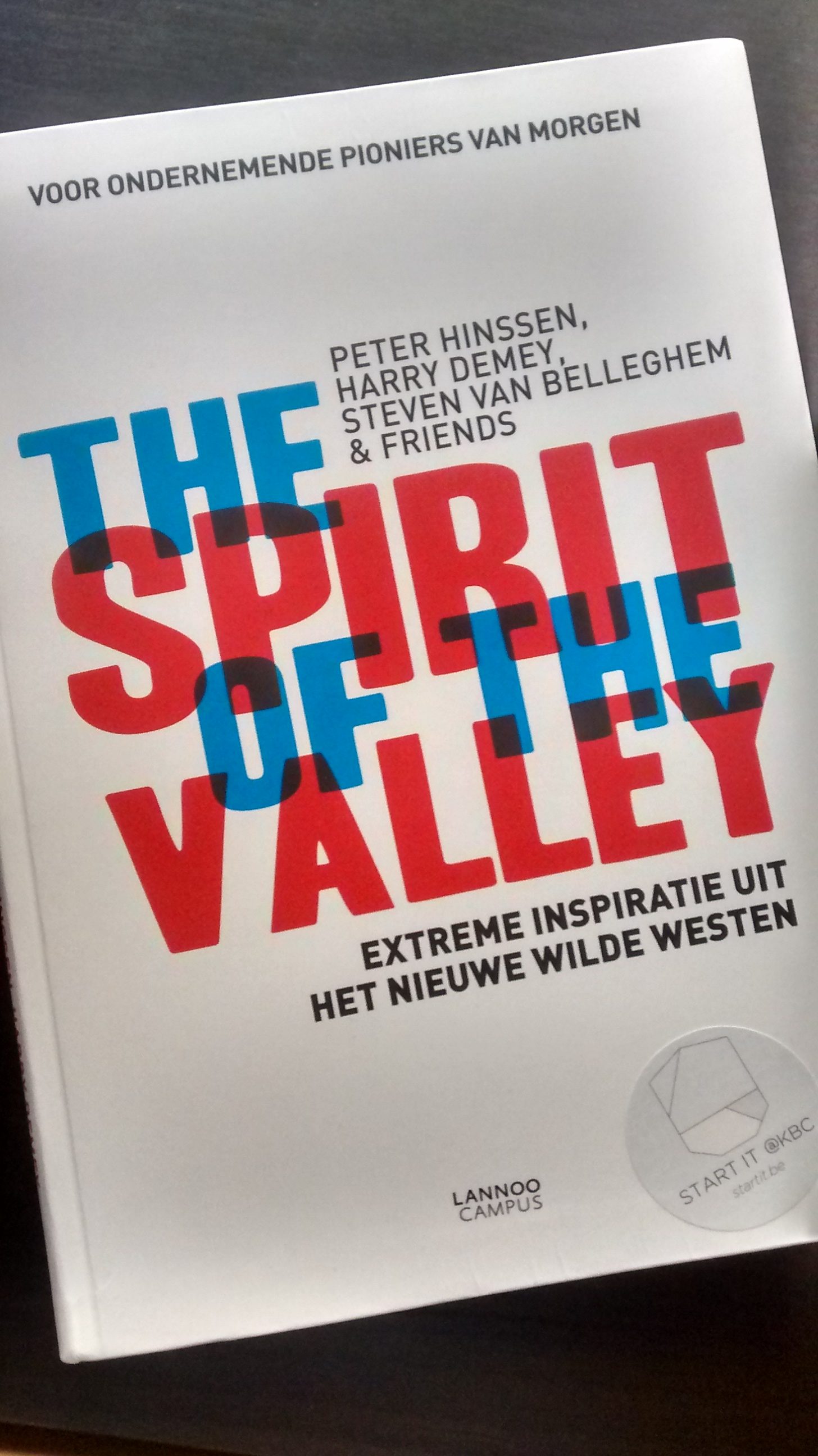 Let me take you back to May 31 2016. We're in the auditorium of the KBC-tower in Antwerp. After Peter Hinssen and Steven Van Belleghem it's now Harry Demey's turn to convince and encourage everyone to take on their vision in life. Perhaps a lifestyle is even a better description of what they're trying to convince us of. It's the lifestyle you're now able to find in the Mecca for the modern, tech-savvy human being : Silicon Valley. It's a special atmosphere in the world of start-ups. An atmosphere of uncertainty, competition and highly critical thinking. But above all of this, it's an atmosphere of burning ambition to become the next big thing. You don't have to be the next big thing to be considered successful but yet it's the dream for most people present on this book presentation. This burning ambition is also lit up by the gentlemen in front of the audience. They excite with numerous examples of brilliant promptings. They also excite with numerous examples of hard work. With examples of innovations that could change the world. Could, but not yet, that's once again the factor of uncertainty. There's no uncertainty in the way these authors of this book talk and write. They know what they think, what they want and how to sell that. They're entrepreneurs in every meaning of the word. And so they wrote this ode to entrepreneurship which can also be considered a manifesto for starting entrepreneurs.

A little bit of history

To understand the present and future, history is often the best place to start. And so did the mentioned authors. They start at the very beginning : How to valley started to exist. It's a story about stubborn pioneers who never forget their vision on life. Pioneers that went after the things they wanted to have. It's a story about people choosing their own destiny and hereby not caring about the consent of mankind. Pioneers who thought differently from the majority of their co-inhabitants on the planet earth. Pioneers with their own values, norms and traditions. Values and norms that we're able to find back at the Stanford university which has been the starting point for several large tech stories. Traditions that we can trace back to a culture where each story seems to start with "once upon a time there were two friends in a garage ... ". It's a history about modern fairy tales. Fairy tales that often turn out to be too good to be true. But sometimes these fairy tales aren't fairy tales but inspiring stories. Sometimes they aren't myths but true legends that really happened. This fuels the hunger of young entrepreneurs. This makes sure there's a sense of encouragement we encounter with every new story that was based on the spirit of the valley.

The culture of the valley

Off course this book isn't just focusing on history because it's the culture that excites. Hinssen and co's biggest dreams seems to be installing a new Silicon valley in Flanders. They also realize we're going to need a different culture in Flanders. But dreams are there to be realized and so they write down every aspect which creates that specific spirit of the valley. The culture down there is one of an ecosystem in which entrepreneurship and courage are central in the rules of thought. It's the courage these companies are looking for, not knowledge. It's the courage to jump into a whole which no one sees. That's entrepreneurship. That's the spirit of the valley. The spirit of the valley is foremost an ode to innovation. And we're talking about innovation in all its aspects. Both in products as labor conditions and other things. There's nowhere else where we experiment as much to achieve innovation than in Sillicon valley. Enterprises down there acknowledge the power these experiments can bring with them. Experimenting often means to get out of your comfort zone. This new environment often compels new and different people. New people you hadn't met yet but are detrimental to your success and who will be able to help and even do so. That's another feature from Silicon Valley : It's a huge environment of networks. You'll never found a network this big of people who are trying to change the world. Nowhere else in the world you will see so many bright people in one place who also got the guts to think out of the box. This brings new and unexpected collaborations and those are the ones who often produce the best result. This book also calls out Flanders for such a network. It's not a coincidence Hinssen's brand new organisation is called Nexxworks. Such a network has a huge impact on a starting enterprise. Access to such a network is crucial to create a dynamic and successful ecosystem. But we shouldn't take over everything from Silicon valley. For example, sometimes there's an unhealthy level of paranoia which often contradicts the company cultures they like to promote. There's the pressure of investors and the urge to sometimes sell there company before they should be sold. Even when it's an offer you can't refuse, building further on your company could create something extremely great. There's also the cheering of failure which I can't get. Don't understand me wrong : It's OK to fail. But it should never be required. Off course you learn from you're failures and you will come back stronger but there's absolutely nothing wrong with doing it right the first time. This last point is a mentality from Silicon valley which I would not like to follow.

The impact of disruption.

The world spins fast nowadays and what the norm today is won't be tomorrow. There's almost a new law to which we are subjected by Silicon valley : Nothing's certain anymore. That's also exactly what makes it so interesting to take the plunge and go along the spirit of the valley. You could be the rebel who takes over the establishment. You could be the miracle that changes an entire sector. Because there is no recipe that tells you how to disrupt a certain sector. Although there might be some guidelines, just the opportunity even excites. There are chances lying out there wide open and they facilitate disruption. That's how disruption happens. There's no point in standing still because sooner or later disruption will get to your sector as well. In the book, you can find numerous examples of sectors that were disrupted.

The last part of the book is full with tips on how to handle disruption and how to incorporate the great aspects of the spirit of the valley. I won't spoil them here. I don't like that. You'll have to read the book to get to know them. You'll have to know dutch I guess since I can't find an English version. If you're able to read it, do so. They are masters in telling their stories and encouraging others to follow their vision. Not only in front of an audience but also in the way they wrote their book. They challenge you to create disruption. They dare you to take the plunge and to challenge the establishment. In Antwerp, we have our story of Brabo and Antigone. It's kind of a rip-off from the story of David & Goliath but that doesn't make it less interesting. These stories also show the spirit of the valley. It's the opportunity for small guys to be smart and to defeat the large established giants. This is the image you picture after reading this book. You'll feel self-confident and you believe in your chances of changing the world. As said before, it's an ode to entrepreneurship. Such an ode requires the demand of continuing entrepreneurship in your generation because if we want to keep evolving as a society, we should never stop creating entrepreneurs.